Today’s post comes from Sr. Ji Choi, a Novice with the Sisters of Bon Secours who is serving in our Retreat Services ministry at the Center. We’re delighted to have her help and look forward to the retreats that she’ll be leading. She’s currently presenting a series of free Stations of the Cross mini-retreats. These Friday retreats in March begin next Friday. Click here to learn more.

March, the Month of St. Joseph 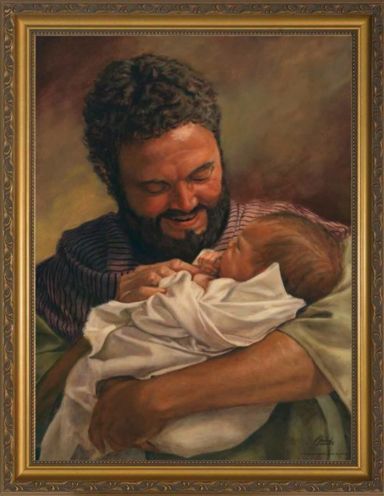 We don’t have a lot of information about Joseph except what is shared in the Gospels, but Pope Leo XIII explained more about him in his 1889 encyclical Quamquam Pluries (On the Devotion to St. Joseph):

“Thus in giving Joseph the Blessed Virgin as spouse, God appointed him to be not only her life’s companion, the witness of her maidenhood, the protector of her honor, but also, by virtue of the conjugal tie, a participator in her sublime dignity. And Joseph shines among all mankind by the most august dignity, since by divine will, he was the guardian of the Son of God and reputed as His father among men. Hence it came about that the Word of God was humbly subject to Joseph, that He obeyed him, and that He rendered to him all those offices that children are bound to render to their parents. From this two-fold dignity flowed the obligation which nature lays upon the head of families, so that Joseph became the guardian, the administrator, and the legal defender of the divine house whose chief he was. And during the whole course of his life he fulfilled those charges and those duties. …It is, then, natural and worthy that as the Blessed Joseph ministered to all the needs of the family at Nazareth and girt it about with his protection, he should now cover with the cloak of his heavenly patronage and defend the Church of Jesus Christ.”

Not only is St. Joseph the patron of the universal church, but also the patron saint of the sick and dying, of workers, and of social justice. In his 1989 Apostolic Exhortation Redemptoris Custos (Guardian of the Redeemer), St. John Paul II speaks to the devotion to St. Joseph and says “that all may grow in devotion to the Patron of the Universal Church and in love for the Savior whom he served in such an exemplary manner… In this way the whole Christian people not only will turn to St. Joseph with greater fervor and invoke his patronage with trust, but also will always keep before their eyes his humble, mature way of serving and of ‘taking part’ in the plan of salvation.”

We are currently planning to offer retreats in response to the Pope Francis’ proclamation of the devotion for this year and I’m excited to lead these soon. Stay tuned!

We pray to St. Joseph for protection of our mind, body, and soul as a patron of the Church until this pandemic ends.

The beautiful painting featured here was done by Jason Jenicke, found at https://kingdomhigh.com/st-joseph-holding-jesus-by-jason-jenicke-framed-art?tag=All+Christian+Saint+Prints&page=4