Today’s post is the 2nd in a series by Fr. Michael Schleupner about Saint Ignatius of Loyola. This reflection introduces the inspiring Spiritual Exercises of St. Ignatius. Let’s take a few quiet moments today to learn about how this incredible resource came to be. Then, we’ve included a prayer by St. Ignatius at the end. Please pray with us. 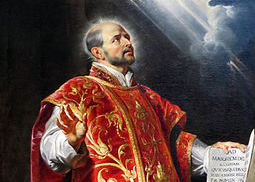 Dear Friends,
Toward the end of his life, Ignatius wrote an autobiography and wrote it as if he were writing about someone else. In other words, he spoke of “he” instead of “I.” He reflected in this work on his conversion which started during his long convalescence from a battlefield injury.

Ignatius writes this:
“When he thought of worldly matters, he found much delight; but after growing weary and dismissing them, he found that he was dry and unhappy. But when he thought of…imitating the saints in all the austerities they practiced, he not only found consolation in these thoughts, but even after they had left him, he remained happy and joyful.”

Ignatius intended that the Spiritual Exercises could be done in various ways, with two being primary: over a lengthy, usually thirty-day silent retreat, or over a span of many months, both ways under the guidance of a spiritual director. The Spiritual Exercises are also the source for what has become a rather popular form of prayer, the Ignatian Examen. The Examen is not just an examination of conscience for purposes of contrition. Rather, it is more of a method of daily prayer that is very inclusive or comprehensive and includes a step of contrition.

I myself have done an Ignatian thirty-day retreat and have also been using the Examen as an integral part of my daily prayer for over twenty years. In a near future blog, I will try to explain and reflect on the five steps of the Examen. However, before doing that, next week, I want to highlight some of the basic themes of Ignatian spirituality.

Quotation above from the A Pilgrim’s Journey: The Autobiography of Ignatius of Loyola.

Take, Lord, and receive all my liberty,
my memory, my understanding,
and my entire will,
All I have and call my own.

You have given all to me.
To you, Lord, I return it.

Everything is yours; do with it what you will.
Give me only your love and your grace,
that is enough for me.