Fr. Michael Schleupner shares last Sunday’s homily with us today, opening with a little humor in to convey an important lesson from Jesus. Let’s take a few quiet moments to meditate on this passage from Scripture today. 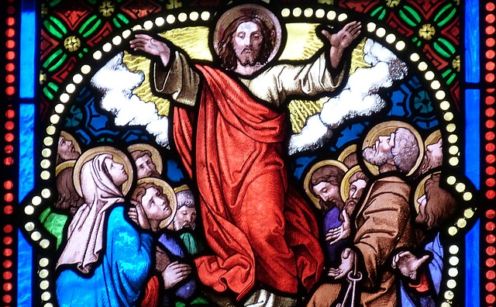 Jesus went to the Mount of Olives. But early in the morning he arrived again in the temple area and all the people started coming to him, and he sat down and taught them. Then the scribes and the Pharisees brought a woman who had been caught in adultery and made her stand in the middle. They said to him, “Teacher, this woman was caught in the very act of committing adultery. Now in the law, Moses commanded us to stone such women. So what do you say?” They said this to test him, so that they could have some charge to bring against him. Jesus bent down and began to write on the ground with his finger. But when they continued asking him, he straightened up and said to them, “Let the one among you who is without sin be the first to throw a stone at her.” Again he bent down and wrote on the ground. And in response, they went away one by one, beginning with the elders. So he was left alone with the woman before him. Then Jesus straightened up and said to her, “Woman, where are they? Has no one condemned you?” She replied, “No one, sir.” Then Jesus said, “Neither do I condemn you. Go, and from now on do not sin any more.” ~Jn 8:1-11

Put It Back Together

There is a story about a surgeon and his wife who were having dinner at the home of some friends.

The surgeon was enjoying a drink in the kitchen while his host was getting ready to carve the roast beef. The friend asked, “Would you like to do the honors, Doc?” The surgeon politely declined. The friend began carving the roast, and then teased, “So how’s my technique, Doc? “I think I’d make a pretty good surgeon. See, it’s all in the wrist. You know, I might take your job.” The doctor was used to this kind of humor and just laughed.

Soon the host finished his work and held up a tray of beautifully carved roast beef. “So, what d’ya think, Doc?”  The surgeon replied, “Not bad. But now – let’s see you put it all back together.”

Jesus Puts It Back Together

Jesus does not put a roast beef back together, but he does teach the way to put us back together. In today’s gospel, some men bring a woman to Jesus. They accuse her of the sin of adultery and ask if it’s okay to stone her to death.

First, Jesus says to these men, “Let the one without sin throw the first stone.”

The effect of his simple, calm, one-sentence response is to get these men to look within themselves. Jesus moves them – and us – to look at our own humanity and sinfulness.  In doing this, Jesus recognizes the reality of sin. The truth is that we all sin in some way.

We can sin against others by being unfaithful to our vocation – as a woman and a man are accused of in this gospel story. Or we can also sin by being self-righteous and unforgiving, as the group of men are in this story.

Jesus, in his response here, sees the reality of sin and wants us to see that we all sin in some way.

The other lesson here is equally important.

Jesus is respectful and not violent. He does not resort to any kind of violence with these persons – verbal, emotional, spiritual, and certainly not physical. Jesus recognizes that this woman has sinned, but he doesn’t call her a sinner. He doesn’t label her or sum up her entire personhood with the one word – sinner. Instead, he respects her as a person and allows her to keep her self-respect. And he does the same thing with the group of men.

Jesus must have been bothered by their self-righteous approach, but he doesn’t put them down or call them any names. Instead, he is at first quiet, gets himself together, and then calmly speaks.

In doing this, Jesus shows how growth can best happen. We are more inclined to grow personally and spiritually when our self-respect is left intact.

So, here Jesus shows us how we are to treat one another. And this is an important lesson for us today.

For the past twenty-five years or so, we here in America have been in the midst of cultural warfare. And in our Church, some promote what they call spiritual warfare.

In these cultural and spiritual wars, people sometimes demonize others. They see certain others as all bad. These approaches are not respectful, and they leave others with little self-respect. Jesus today shows a vastly different approach. His approach gives the opportunity for us to grow personally and for us to live and sort things out together as a community.

Jesus Puts Them Back Together

So, to go back to where I began, Jesus in effect does what that surgeon teases his friend to do.