Today, we continue on the Good Samaritan theme from Sunday, sharing Fr. Michael Schleupner’s homily. Let’s read about a modern day example that can inspire each of us to do our part in the world. 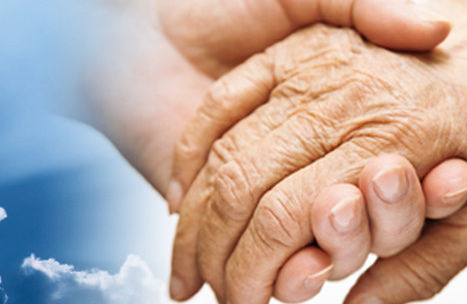 One night several years ago, nurse Sandra Clarke was making her rounds at Sacred Heart Medical Center in Eugene, Oregon. An elderly, frail patient made a request. His organs were failing; he had a do-not-resuscitate order. He knew he was dying. He asked: “Will you stay with me?” Nurse Sandra Clarke promised that she would – as soon as she finished her rounds. Ninety minutes later, after checking charts, assessing vital signs, dispensing meds, and assisting with bathroom needs for the other patients, she returned to the man’s room. But it was too late.

Sandra Clarke later said: “I was angry because I was so helpless. All he wanted was companionship.”

That led this Oregon nurse to start an organization called No One Dies Alone – the acronym is NODA – N-O-D-A. NODA places volunteers with patients as they are dying. To date, the program has saved thousands of patients from a lonely death. NODA serves patients who may not have any family, the homeless, those whose families must travel long distances, those who are estranged from their families. More than fifteen hundred NODA programs are operating in hospitals and prisons worldwide. One volunteer is a man named Ken Budd in Virginia.

Six years ago, his mother died alone in her home of a heart attack. Ken Budd says that he still hasn’t shaken the feeling of guilt and failure. He – a volunteer in NODA, recalls that on one evening, he entered the room of a 78-year-old woman who is dying. She may not survive the night. He says quietly, “My name is Ken. I’m a volunteer, and I’m going to be staying with you a bit. It’s an honor to be here.” Ken Budd writes: “I sit quietly. The dying can feel our presence, I’ve been told. That’s the mission here. To be a compassionate human being. To provide family members – in this case, the woman’s devoted daughter – with a break from their vigil. To make certain someone is here if she needs something. To ensure that she won’t feel alone and, most important, that she won’t die alone.”

So, nurse Sandra Clarke, volunteer Ken Budd, and NODA – No One Dies Alone – remind us that on our life’s journey, we do not travel alone. We are to be companions on this journey to God. Jesus says today: we are to be “neighbor” to one another. We are called to lift up and to care for one another, and to allow ourselves to be lifted up and cared for when we stumble or fall or are in need. The work of the No One Dies Alone volunteers is the work of a current-day Good Samaritan.

Like the Samaritan in [Sunday’s] gospel, those in NODA mirror the love of God and the compassion of Christ in a very real, nitty-gritty way. I think the prayer is this: may we be willing to journey with one another as “neighbor” in the particular way that we may be called to do so in our own life situation.