It was such a pleasure to have Fr. Michael Schleupner and Fr. Phil Cover with us last week for the directed retreat. They took turns celebrating Mass each day and Fr. Michael shared today’s post on Friday for the Feast of St. Mary Magdalene. Let’s see what we can learn about this amazing woman from scripture.

On the first day of the week, Mary Magdalene came to the tomb early in the morning, while it was still dark, and saw the stone removed from the 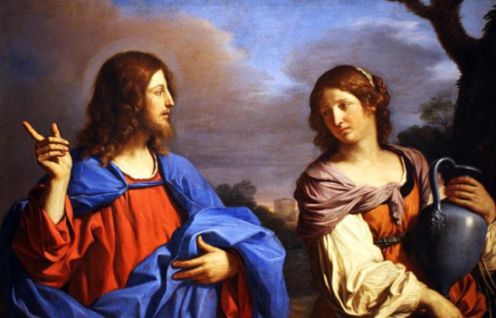 tomb. So she ran and went to Simon Peter and to the other disciple whom Jesus loved, and told them, “They have taken the Lord from the tomb, and we don’t know where they put him.” Mary stayed outside the tomb weeping. And as she wept, she bent over into the tomb and saw two angels in white sitting there, one at the head and one at the feet where the Body of Jesus had been. And they said to her, “Woman, why are you weeping?” She said to them, “They have taken my Lord, and I don’t know where they laid him.” When she had said this, she turned around and saw Jesus there, but did not know it was Jesus. Jesus said to her, “Woman, why are you weeping? Whom are you looking for?” She thought it was the gardener and said to him, “Sir, if you carried him away, tell me where you laid him, and I will take him.” Jesus said to her, “Mary!” She turned and said to him in Hebrew, “Rabbouni,” which means Teacher. Jesus said to her, “Stop holding on to me, for I have not yet ascended to the Father. But go to my brothers and tell them, ‘I am going to my Father and your Father, to my God and your God.’” Mary Magdalene went and announced to the disciples, “I have seen the Lord,” and then reported what he told her. ~ John 20:1-2, 11-18

The gospels are very clear. She was the leader of some women who were with Jesus through at least parts of his public ministry, and she was present with some other women at the crucifixion. She and some other women did not flee in fear, like the apostles did.

Then, Mary of Magdala was the first to go to the tomb on that Sunday morning. In three of our four gospels, Mary of Magdala is the first person to whom the risen Christ appears. In all four of the gospels, she goes and announces the resurrection to the apostles, or should I say, to the other apostles.
Her name is mentioned twelve times in the four gospels – more than some of the apostles and more than any other women except Jesus’ mother.

And yet, throughout much of history, Mary of Magdala has been played down. For starters, she was not one of the twelve named apostles, all of whom were male. It was a highly patriarchal culture and maybe the amazing thing is that the gospels even admit the prominent role that she had with Jesus and in proclaiming the good news.

Her role was further lost or denigrated because of a mistake made by Pope Gregory I in the 591. He identified Mary of Magdala with the unnamed sinful woman who anointed Jesus’ feet at a dinner in Bethany. Because of this false identification, Mary of Magdala came to be seen as a sinful person, even as promiscuous, as a prostitute. That image of her continued for fifteen hundred years. About fifty years ago, Scripture scholars realized the mistake that had been made and that, in fact, Mary of Magdala was a great disciple.

Some women’s groups in our Church have developed a particular devotion to Mary of Magdala in recent decades. And in 2016, Pope Francis did something very significant. Mary of Magdala had already been a recognized saint, and the day for celebrating her – July 22 – was ranked as a memorial. Pope Francis raised the ranking to a feast day, the same ranking given to most of the apostles. And Francis also said that it is fitting to call her the Apostle to the Apostles – especially since she brought the news of the risen Christ to the twelve apostles.

So, what we can say is that Mary Magdalene, or Mary of Magdala, is a worthy, if not outstanding model for women of faith and for all of us, men included.